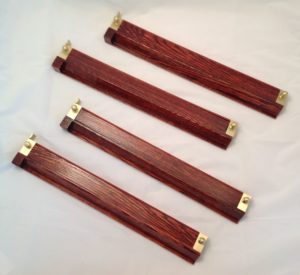 Our original rack design, the Limited Edition, started out as a floating ball for a pusher end.  Think Parker Brothers Rolling Writer; fluid-smooth. While highly functional, the floating mechanism is quite complex and somewhat bulky.

While the Limited Edition racks convinced the naysayers that pushers could be both beautiful and functional, the design is admittedly heavy; good for home use (the card, when snagged on an errant sleeve, will not generally disturb the offending player’s tiles) but not so good for schlepping to the games twice a week.

Just how limited is the Limited Edition?  Two sets were made; one burned up in the fire and one has been resold and is believed to be in play somewhere in California.  So, one (1) would be the limit; this edition is retired.